The Dangers of Dog Waste

If you’ve seen it once you’ve seen it a thousand times: some ask, some tell, and some threaten. Community officials often post multiple signs in municipal areas to remind people to pick up pet waste. Whether or not you abide, the message is very clear –scoop the poop!

Unfortunately, as dog owners, we often find ourselves in the situation where nature calls for our pup, we don’t have a bag! Sometimes Fido strays far off the trail or out of sight to do his business and we think “no harm no foul.” But even though we dodged the negative social implication of not scooping dog poop, we still neglected the larger environmental concern: Dog waste can be toxic.

Unlike other animals, dog waste isn’t exactly a fertilizer. Contrary to cows with diets of plants and grains, dogs consume meat. A meat diet means their waste is full of bacteria and parasites. According to the Environmental Protection Agency, a dog can release 7.8 billion fecal coliform bacteria a day in its waste. This bacteria is known to cause cramps, diarrhea, intestinal illness, and serious kidney disorders in people. Some states even warn their beach-goers that two- or three-days’ worth of droppings from a population of about 100 dogs will contribute enough bacteria to temporarily close a water front and watersheds near an affected area.

You might be thinking “Why aren’t wild animals as big a deal when it comes to waste pollution?”

Unlike pets, wild animals can roam. In the United States there are 89.7 million dogs, and on average, a dog excretes between 0.5 and 0.75 pounds of waste per day. With such a high concentration of dogs in areas, it leads to a high concentration of poop. It is estimated only 60% of dog owners pick up dog poop consistently. This, in turn, leaves a lot of unscooped poop.

Unscooped dog poop can leach into the watershed and decay, releasing compounds that can kill fish, and any animal in the vicinity that relies on that water. The nutrients in the waste can even cause excessive algae growth that will upset the natural balance of water ecosystems.

Many solutions have been proposed to combat the dog waste issue but only one has been proven to be a successful enforcement method: Doggie DNA.

DNA testing is nothing new. But PooPrints has taken it to a whole new level. Partnering with 4,000+ communities across the US, UK and Canada, we are encouraging owners to pick up dog poop.

With the PooPrints program, communities can identify specific dogs’ waste when it is not picked up.

PooPrints’ doggie DNA program not only helps to sway more communities to become pet-friendly but, its a huge help to the environment. By keeping pet waste off the ground, PooPrints and it’s partners are contributing to cleaner waterways and reducing billions upon billions of coliform bacteria from unscooped waste that could harm people or the environment.

Stevie is our main communications person here at PooPrints. She loves her chocolate lab, Kimber, and spends her free time helping her husband on their family farm. 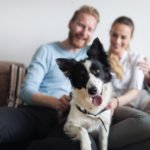 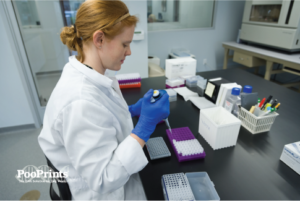